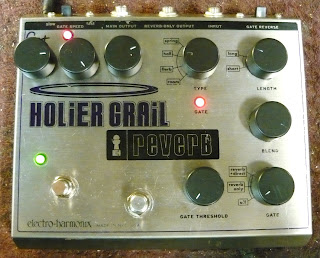 Well, this started off as a matter of interest and turned into the ultimate surf pedal. I had this old EH Holier Grail that had been sitting around the workshop broken, with boxes of other pedals (and amps/guitars etc) for a few years. A friend of mine bought one exactly the same off EBay and when it turned up, it had EXACTLY the same problem. The voltage regulator was burned out along with a few resistors in the same circuit. These are all easy parts to get and once his was repaired, so was this one.

The main "problem" with the Holier Grail, and lots of reverb pedals is it drops in volume when the effect is engaged. To fix this I put a simple point to point single transistor "boost" after the output of the effect with it's own volume. Around 5-6 is neutral volume so it also has a fair amount of gain that sounds great driving the reverb into a little valve amp.
But why stop there ? It was itching for a tremolo to top it off. Since there's PLENTY of room in these things I decided to add the fantastic, yet subtle EA trem circuit that I love. It has a real "amp trem" feel to it and is a fairly simple (and much copied) circuit. This is added after the reverb effect with it's own true bypass footswitch (with LED) with RATE and SPEED knobs. The only real "issue" is the original Holier Grail runs on 18V centre positive power (opposite to most pedals) and the trem and boost work on 9V centre negative but it just means the EH works off it's own power supply as per factory. Easy. 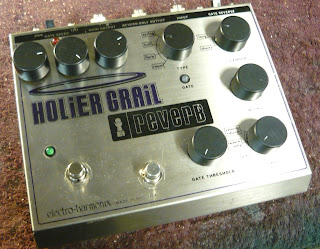 So the reverb works as standard, but has an output volume boost on all settings. This can feed into the trem circuit with enough gain to "break up" the trem nicely and push your amp into slight overdrive. So, you have the 60's surf sound in one pedal.
Anyone who wants their EH reverb pedal modded with one of both or these mods, contact us for details.