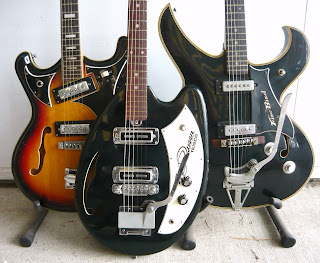 I've always loved "cheap" (I use this term in the past tense) Japanese guitars that you could find at secondhand shops for great prices. Their shapes often made nearly every western manufactured guitar look so conservative and plain. They had points going the wrong way, lots of chrome and vibratos that look like you could have made a bridge out of. Sure, they were clunky, often hard to play and would feedback if you looked at your amps volume knob, but they looked (and sometimes sounded) so cool.

I had quite a collection of these type of guitars including my 2 favorites, Tiesco and Guyatone and was always fascinated with what else was "out there". Getting a copy of 60's Bizzare guitars by Rittor Music in Japan opened up a whole new world for me. I sat there and drooled over the shapes. I couldn't read the book, of course, it is in Japanese. There were so many, too many to get, but there, in amongst the pages and pages of weird guitars were 3 guitars released by Teisco in 1967/68 that I HAD TO have. 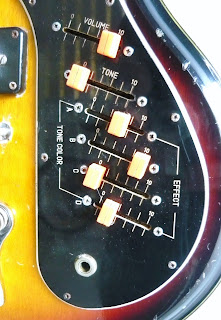 These Teiscos appeared at a significant time in Japanese guitar making. Teisco, which had formed following World War II as a Hawaiian guitar and amp company, had considerable success with exporting into the 1960s. They were probably the most successful brand during that decade. They made the fantastic Spectrum series. In January of 1967 they were acquired by Kawai, the piano company turned guitar maker. Kawai seems to have kept Teisco and its own lines separate throughout this period although in a lot of cases the same guitar could be bought with either brand name on the headstock, depending on what country you lived in.

Around this period the Japanese companies were feeling were getting more adventurous and more confident in their products and began to come up with original guitar designs. A whole spate of Japanese-style guitars appeared, reflecting creative thinking, not just copies of other people.

This was, perhaps, the first golden age of Japanese guitars. All contributing to coolness. 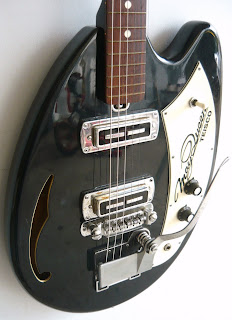 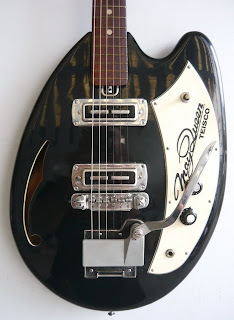 The May Queen just stood out as a reject from the Rickenbacker factory that had been left in the sun to melt. This was first of the "set" that I got as they are probably the most common (out of these 3 anyway). These are semi solid construction with 1 F hole and an "organic" body shape that was very different from anything mainstream available at the time. These have been re-issued in recent years by Kawai and the re-issues are great, especially the top of the line version
that has a copy of the original vibrato and pick ups. They are very Rickenbacker sounding even with the cheaper re-issue mini humbuckers. 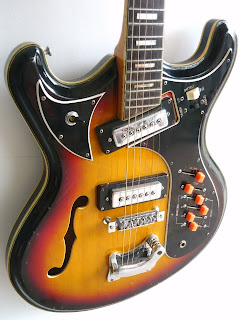 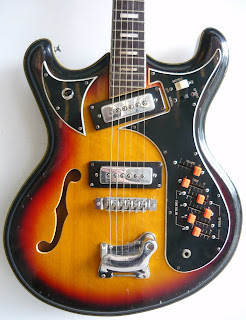 Next I got the Vamper or the EV52-T. Obviously heavily inspired by Mosrite with a little Burns thrown in, these were offered in a few different versions and slightly later as a much "cut down" V2 version. I needed to have the one with all the bells and whistles and here it is. This is fully bound and inlayed, as top of the line Teiscos were AND has active electronics. The tone control sliders are essentially a sophisticated parametric EQ that is incredibly good and very quiet. The neck on this is AWESOME. VERY Mosrite with a thin but very comfortable profile. The pick ups have plenty of sparkle and bottom end especially with the tone shaping circuit on. 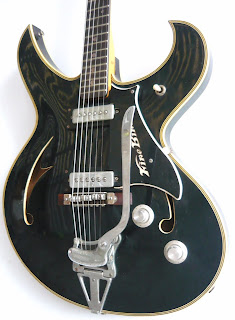 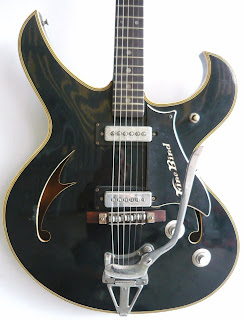 The last of the 3 to get was THE rarest of the rare. The AMAZING Fire Bird. These never took off and from what I've been told were dropped pretty quickly. This is a great guitar to look at and play. It is a full "thin line" hollow body and is very "lively" with another great neck. It is deceptively big with those incredible, evil horns. This is absolutely THE BEST shape EVER !!! These are HUGE and everything about them bucks the rules. 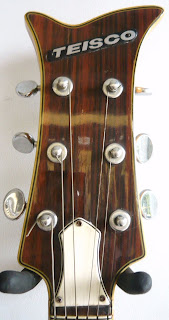 All three guitars have vibratos based on the Mosrite vibrato and work exceptionally well. I personally think it's the best vibrato design out there. These guitars were well made and NOT cheap pawn shop specimens as Teisco (and other great Japanese manufacturers) are lumped in with. Teisco made "cheap" entry level and student guitars, but these aren't amongst them. These, like the Spectrum series are every bit as good as any of the great Japanese factories that have produced guitars over the last 40 years. All were offered in bass versions and I assume these are even rarer. I have only ever come across 4 other Fire Bird guitars (all sunburst) and 1 bass. I have seen less than 10 Vampers in this version and of course have seen a few, original May Queens as they were the best selling of this series. How much are they worth ? Whatever a collector is prepared to pay, but mine aren't for sale, at least not for now.