Tym Return of the Human Fly 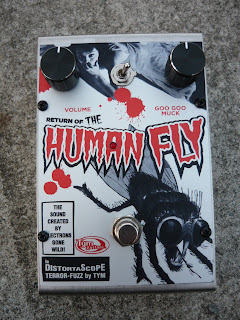 This has been one of my best selling pedals. When I heard Lux Interior of the Cramps had died I took it upon myself to make a pedal in homage to him. This is a NASTY 60's fuzz that I call the "sausage sizzle" type fuzz. Loosely based on a Mosrite Fuzzrite with more gain and "sizzle" this is that classic early Cramps type fuzz. With controls for Volume and Goo Goo Muck, this pedal is a garage rock players dream come true. The Goo Goo Muck knob works in both directions for more, and more gain. "Boss" compatible 9V adaptor and switchcraft jacks top it off. The original Human Fly was made in very limited numbers and is no longer available.

After getting LOTS of people asking for one I decided to "reissue" the Human Fly as the "Return of the Human Fly" (c'mon, it was asking for it) which is essentially the same pedal with slightly different artwork and a tone switch to take the tops off if you're using a Tele or similar so it doesn't take your head off.

The REVENGE of the Human Fly